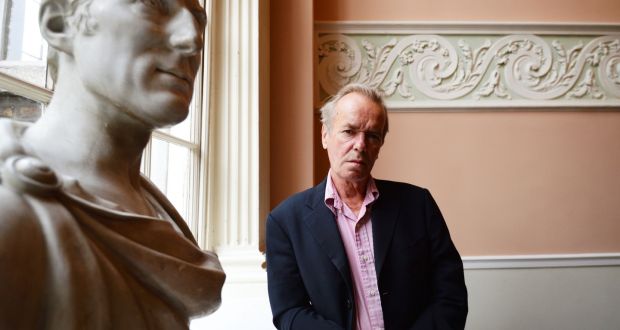 “I peaked at the age of 40.” This admission comes in one of two, joyously self-deprecating essays collected here about Martin Amis’s beautiful game. “I noticed that I was losing to my erstwhile equals; then I started losing to people I had never lost to; then I started losing to absolutely everybody . . . The ball comes over the net like a strange surprise: you just stand there and watch until, with a senescent spasm, you bustle off to meet it.”

As the choice of “bustle” suggests, his prose is in better shape. As in tennis, Martin Amis boasts a range of lightly executed master strokes, and sustains an entertaining game. There is the “looping forehand” evident in his analysis of the “comic and deflationary” pleasures of the greats of Jewish-American fiction (Nabokov, Bellow, Roth, firmly seeded 1, 2, 3). The “accurate backhand slice” is lethally deployed in his reportage for Newsweek covering the Republican Party conventions in 2011 and 2012. The defensive lob (“far and away my most effective weapon”) scores points in gossipy pieces about the effects of celebrity on his authorial ego (“People say that novelists, nowadays, are like rock stars. On what planet are they living? It’s been that way for years.”) Most of his neologisms are aces. “Jingobilly” for “the kind of patriotic folk music” performed for the Republican crowd in a Tampa Bay convention centre. “Horrorism”, served up to cover massacre by suicide bombing, cost him the match in a 2006 tournament about his views on Islamist terrorism against opponents, heavy-hitter Pankaj Mishra, and the unseeded Terry Eagleton. The sting of that loss smarts in several pieces collected here.

Amis is as big a personality on the literary court as the players he lionises. The critical distinctions he draws between Vladimir Nabokov, the patrician émigré spinning “divine levity” out of his family’s flight from the Holocaust, and Saul Bellow, the loving immigrant with a visionary intellectual range and sentience, most often hit the mark. But the trouble with these rankings is that the Amis centre court is exclusively reserved for the male tournament. And this phallocentrism also informs his choice of critical terms. He approvingly notes Nabokov’s description of the generative “throb” or “shiver” necessary to fiction, an ejaculatory metaphor he adopts for his own creative process, despite the qualms he articulates about Nabokov’s thirst for pre-teen girls evident in six of his 19 fictions.

In The Rub of Time, boys play, and women are watched as ball girls. The contents page features two female writers, Jane Austen and Iris Murdoch, but their presence here is mediated through the narrow lens of male film directors. In “Jane Austen and the Dream Factory”, we find Martin Amis as Regency buck scorning the “Darcymania” inspired by screen adaptations, including “the bottomlessly horrible” Four Weddings and a Funeral, manfully endured in the company of Salman Rushdie. His review of Murdoch unconsciously colludes in rubbing out “the most intelligent woman in Britain”, an Amis family friend, by reading back through her fiction to discover “the fever of fragility” running through “its vigorous imperium”.A defensive player might counter that he recognises patriarchal privilege as his own back line, and masculinity his field of play. And it is instructive how he negotiates the sexual politics of his chosen greats through their minor works and correspondence, Philip Roth’s The Dying Animal, Philip Larkin’sLetters, Nabokov’s Ada (“that incontinent splurge”) and The Original of Laura. His common diagnosis is that these texts fail due to the unpersuasive lack of distance between authorial desire or prejudice, and the narrative device. The charge-sheet is drawn up on the only valid literary grounds, those of style. These are aesthetic flaws without socio-political or moral consequence. He states, “the charge of misogyny etc is just a straight-forward category error”, an inappropriate question to raise of capital L “Literature”, and adds: “The right-on heroine . . . is of no conceivable interest to any genuine writer: besides, she is well-represented in any number of admiring narratives – and you can get all you want of them at the airport.”

In Time’s Arrow, the more successful of his two formally innovative novels about the Holocaust, the unreliable narrator notes of his Nazi protagonist and alter ego: “Women’s bodies bring out all his finer feelings. The fact that a woman’s body has a head on top of it isn’t much more than a detail.” The relationship is governed by synecdoche: a woman’s anatomical parts stand in for the (“w” as an optional extra) hole. As a competitor at the World Series Poker Tournament, Amis soaks up the Sin City atmosphere: “I am now old enough to inspect the attendant girls with an anthropologist’s eye: astonishingly, the average set of vital statistics would go something like 38E – 28 – 26,” but cannot resist a connoisseur’s postscript: “these top-heavy buttless wonders wouldn’t turn any heads in Rio where surgery ‘takes place below the waist’”.

Amis prefers to declare himself “a gynocrat” – rather than a feminist – yet when his finer feelings are evoked, the chivalric desire to protect women is still articulated in synecdochal terms. The Iranian, Neda Soltan, a “defiant individualist” killed while protesting against the re-election of Ahmadinejad, is iconised as “the gentle face of the modern” and in this rhetorical flourish, her individuality is erased. Similarly, Princess Diana is “a non-story, remorselessly and fanatically annotated by our own projections and desires”.

And yet, a gonzo joy is evident in enumerating all the acts and parts performed

In his introduction to The Second Plane (2008), Amis announced: “Geopolitics may not be my natural subject, but masculinity is.” In an age when geopolitics and misogyny converge, to articulate violence against women in synecdochal terms – “grab them by the pussies” – then for all the reasons above, it’s Amis’s commentary you want to read. “Narcissus is auto-erotic, Trump is self-aroused.” Trump is “a gawker, groper, and a gloater” but in his choice of public venues for making passes at women, he betrays “a sexual yellow streak”.

For all its virtuosity and stylistic brilliance, The Rub of Timeclearly reveals the chalk-dust in its game.

Molly Skrine learned young how best to negotiate the eugenic politics of the Anglo-Irish drawing room. “Being attractive was essential, a passport to freedom and adventure. . . I always knew how to flatter and yearn. . .” Femininity among the gentry combined the decorative, conversational and managerial arts in equal measure, and was frequently competitive: “we vied with each other in the forcing of bulbs”. As fearless at the dinner table as on the hunting field, Molly appears to have performed as her class demanded, using her wit to entertain “the chaps” and to establish intimacy with their wives and sisters, while noticing the self-delusion and fantasy that sustained her class without pursuit of trade or income. At 18, she published the first of 11 novels under the pseudonym MJ Farrell. Later she’d describe a Farrell novel as “seventy thousand words through which the cry of hounds reverberates continually”, though this is to dismiss the complexity of their sexual politics. With the £7 advance, she threw a cocktail party at the Shelbourne and bought the dresses denied to her by her austere mother. 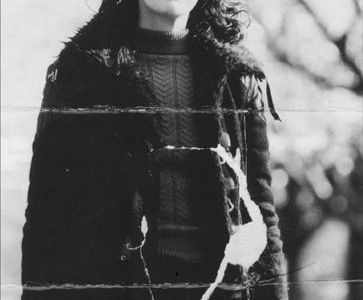 In October 1969 Angela Carter discarded her wedding ring in an ashtray at Tokyo airport before boarding her flight home. She had spent a fortnight with Sozo Araki, an aspiring writer and pinball addict, in the “palpably illicit” bedrooms of Tokyo’s love hotels. She relished the mirrored ceilings and the unabashed laughter of the maid who delivered them towels. In later life she’d recall how Sozo’s face had been lurking inside her consciousness, “as an idea that now found a perfect visual expression.

In March 1941 the upper-crust English communist Decca Mitford sent her youngest sister a telegram congratulating her on an “excellent season’s duking”. Decca’s words were premature. Debo, a comparative moderate among notable extremes, had indeed bagged the dashing Andrew Cavendish, but the Devonshire title and the family seat at Chatsworth were destined for his eldest brother William, or Billy Hartington as he was known to friends.

“Duking” was what the London season was all about, although polite girls would deny it. In Hons and Rebels (1960) Decca recalled the “endless successions of flower-banked ballrooms filled with very young men and women, resembling uniformly processed market produce at its approximate peak, with here and there an overripe or under-ripe exception,

I heard this voice on the radio about a month ago. It was like getting washed with a pail of water – a cracked pane in the window and frost outside.  Yesterday was my birthday, so we went to hear Lisa O’Neill play at the Sugar Club.  I could try and describe her extraordinary performance, the humour of her song-writing, the range of her voice but there’s little point.  Just treat yourself to the album:  Same Cloth or Not.  Here’s a taster to wish you all a Happy 2014!

For those of you unfamiliar with Sarah Broom’s poetry, here she is reading from Tigers at Awhitu.

Richie O’Donnell, who directed The Pipe, a documentary about the Shell-to-Sea campaign in Erris, has just produced a short documentary for Al Jazeera about the killing of three men in Bolivia in 2009.  Michael Dwyer, from Tipperary, was shot alongside two Hungarians –  Arpad Magyarosi and their friend and leader, Eduardo Rozsa Flores – by the Bolivian security forces on suspicion of a terrorist plot to kill President Evo Morales.  You can view his documentary at the link below. It’s a complex story that spans five countries: Romania, Hungary, Croatia, Ireland and Bolivia, and O’Donnell does very well to fit it all into the 25 minutes allotted here.  It’s eerie to watch the home movies and photographs of the men parading their weapons and camaraderie for friends back home, reminding me of that family portrait of Maud Gonne, John McBride and little Seaghan in their white frilly fineries posed around a table laden with guns and ammunition belts in the wake of the Boer War.

I have an interest in the story because I knew Eduardo Rozsa Flores. I met him during the year I spent in Budapest, 1992 – 1993, when he was running a brigade of international volunteers on the Croatian side in the Balkans War.  You can read my account of the events in Bolivia, their origins and , and their chief conspirator, in ‘The Universal Soldier’, Dublin Review, 36, Autumn 2009.  There’s a link to the piece on the home page under ‘Writings’.

I am a writer and lecturer in English literature at IADT, Dun Laoghaire. I conduct writing workshops on a freelance basis. The Crocodile by the Door, my memoir about life on a family sheep farm in the Dublin mountains, was shortlisted for the UK Costa Book Awards and the BGE Irish Book Awards. It is published by Penguin.